Ever since I can remember, I’ve been a fan of baseball. Growing up, my dad and brother would always watch and talk about baseball with each other.  It was something that brought them together. They would spend their weekends at the fields practicing and attending games. I saw baseball as a means to get closer to my dad, as I always was envious of the relationship he had with my brother.

When I was very young, I would sit with my dad while he watched baseball on TV. I would ask him questions about players and we would talk about how the game is played. Eventually, he started to take me to watch games with him as he did with my older brother. When my brother left for college, my dad began to spend even more time with me. At age seven, my dad signed me up to play softball. We would go to the field everyday together to train and it became the backbone of our relationship. Growing up, my dad played competitive baseball, so my involvement with softball brought memories of when he used to compete. By the time I was nine, I became so obsessed with the sport and tried out and made the competitive travel softball team in my area. This was hugely in part to my dad’s invested interest in my game and the time we spent together training.

The time we spent at the field talking about his childhood memories with baseball and my current experiences with softball lead to a deep connection. Over the years, I have learned so much about how my father grew up and the things that are important to him. On the flip side, he learned about my struggles and what my passions are as well outside of our common sport.

As my travel softball career progressed, my dad and I would spend every weekend together traveling to different cities to compete against the most competitive teams in the state and in the nation. I realized this sport, that initially was something I used as a means to spend time with my dad, could provide me with ample opportunity to further myself as an individual, not just an athlete. In 7th grade, I began the recruiting process to find a university and a softball program that would provide me the opportunity to continue growing as an athlete and also further my education and six years later, I found myself at Emory University.

Not only did baseball spark the intense bond that I have with my father, but it also is the main reason for my achievement academically and socially. The lessons I learned from the sport itself are useful in every facet of my life including teamwork, resilience, accountability, and communication. I also learned many lessons about what I must do in order to keep myself on the field and continue to play the sport I love such as balancing my academic work, time management, taking care of myself, etc. 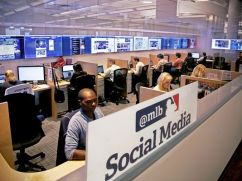 For my final project, I wanted to do research on something meaningful and in line with my passions.

As I study at Emory University and simultaneously play softball, I thought the driving force that brought me to where I am today would be appropriate. After college, I hope to take my passion for baseball and apply it in the work force. This past summer I had the opportunity to work for the Tampa Bay Lightning NHL team. I was able to participate in many workshops with the other sports organizations in the area and got exposure to the role media plays in the NHL, MLB, NFL, and MLS. Throughout this project I hope to explore the ways media affects specifically the MLB and the role that media plays when it comes to marketing and fan experience.