In 2018, one would think that equality would no longer be an issue.  Especially with sports which is a worldwide outlet for competition or entertainment, it is unfortunate that these issues still exist.  These games that are shared throughout the world still bring about inequality between gender in men and women. There is plenty of research to show where the general public and media lack in understanding how to portray and treat the men and women athletes the same- specifically with the sport of basketball.

The book, Sex Segregation in Sports: Why Separate Is Not Equal, discusses the discrimination between race, gender, sex, and ethnicity, among other categories, and how prominent they are in athletics.  In particular, the book references the way in which females are displayed in the media and how the media diminishes their athletic abilities.  Women are often portrayed in respect to their femininity rather than their athletic accomplishments. The book suggests that this common understanding of women in sports and the overall topic of gender inequality in sports is due to the way humans in

America have set certain standards to distinguish gender.  The book states, “However, it is important to note that because the institution of sport is socially constructed, sexed rules and performances in athletics are not inherently better or worse. Sports are human social inventions and not naturally occurring phenomena, and therefore one group, whether biologically defined or not, cannot be better or worse at sports,” (Milner, 3).

Socially constructed is a term used for concepts created by society that are not genetically or naturally formed.  These concepts only exist by the existence of humans, and, in some cases, only exist in certain areas of the world depending on the culture of the people. Specifically, gender is a social construct.  Gender defines the way in which men and women are “supposed” to act and behave to be considered one or the other. For example, men are only better at sports because it has been an idea repeated over and over since the creation of this societal pastime in America (Milner, 52).  However, this is not an accurate depiction of men compared to women in sport, it is just an image that has been widely accepted by society for too long.

In addition to gender in sports being a social construct, this book suggests that sex and gender are social constructs outside of sports as well.   America is a patriarchy that values masculinity and undervalues femininity. Sex and gender pose as a type of social status; men are seen as “better” because their sex and gender are identified as male.  The book also suggests that physical appearance and ability are extremely valued in U.S. society, thus, giving males another advantage by perception. Males have the advantage in most categories because, according to the book, they receive more attention in all respects to their physical capabilities that women do not possess. Therefore, men’s sporting events are more likely to be viewed by a larger, more engaging audience (Milner, 53).

An interesting point that the book brings up is the idea of recognizing the same skill differently depending on the gender of the person performing the skill.  For instance, when men dunk in basketball it is deemed as cool and exhilarating, meanwhile, if women were to dunk the public would find some way to criticize their game because they are female.  If the women would dunk in their game as much as the men do, it could lead to comments like “poor defense” or women cannot shoot and resort to dunking to make up for their lack of ability. However, looking at the women’s game, the way it is actually played, should be acknowledged as being “fundamentally sound,” (Milner, 53).  Growing up, all kids learn to play the game of basketball through the fundamentals. Why are women basketball players diminished for playing the game the correct way?

A big reason these perceptions have not disappeared is because of the media.  The lack of media coverage of women’s sports in general, but specifically women’s basketball, fails to portray the significant growth it has made. Even though the acceptance and participation in sports by females has greatly increased over the past almost forty-six years, the media has yet to keep up with this growing area of competition. Forty-six years ago, on June 23rd, 1972, Title XI was passed which allowed female athletes to create such a huge jump in their participation in sports. The discriminatory gap between men and women with regard to sports began to shrink, but in order to create equality amongst the genders, the media must change the way it portrays the female athletes.

Another interesting point to look at with the media is the part that the general public does not see, but it is extremely important to the success of the sport- advertising.  There is a difficult dynamic between the media outlets and advertisers because the two contingencies depend on one another. To elaborate, the media, television in this case, does not like to broadcast a sport without knowing for certain that the advertising market will support them so they do not to lose money (O’Reilly et al., 244).  However, marketing foundations are highly unlikely to put out advertisements during televised programs that are perceived as unpopular or do not have a large enough base of an audience. This book states that the media plays a large role in the influential part of attracting an audience to sporting events, thus, making them more favorable by the public. The back and forth issue between the media and the marketing business affects sports like basketball, but only on the women’s side.  Women’s basketball is not heavily viewed by the American population in large part due to the lack of media representation is receives.

In 1989, the University of Southern California conducted a study to track the coverage of women’s sports on television.  They updated their statistics every five years. An article published by Ian Chaffee, states that the statistics found in 2017 based off of this USC study showed that women were only covered 3.2% of the time.  Whereas, the number was 5% in 1989, the year USC began their research. Also, the article revealed that SportsCenter runs women’s stories for approximately half the time of the men’s stories. Women’s coverage in the media is described as “gender bland.”  Further, the broadcasters are not very enthusiastic in the material they are covering and read the story only because they are required to read it.  The article concludes with the powerful remark from Michael Messner, a professor at USC Dornsife, “Though the father network is not gender-marked with an ‘M,’ it remains a kind of electronic man cave, by, for and about men’s sports.”  This alludes to the brand channel recently established by women who wanted better coverage of their sports called ESPNW. Adding the “W” to the end of ESPN suggests that there is indeed a separation between gender with regards to sports.  The biography on the twitter handle @espnW reads, “A voice for the woman who loves sports.”

The most viewed basketball event in the men’s and women’s college game is the March Madness NCAA Tournament.  The March Madness NCAA Tournament is held every year and consists of the sixty-four best teams in collegiate basketball on both the men’s and women’s sides. Being the most viewed basketball event, it would seem obvious that all games would be broadcasted on television. However, to no surprise, only the men’s games are entirely displayed on television while the women’s games must be found online.  Both tournaments can be watched from applications, but the  women’s side uses 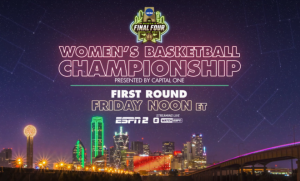 this as one of its only bases to watch the games. The women’s games are sponsored by ESPN but only on ESPN 2 or ESPN 3 until the championship game which is
broadcasted on the main channel, ESPN. On the other hand, the men’s tournament is sponsored by TNT, TBS, ABC, and CBS. The men and the women play four games at or around the same time during the first two rounds of action. Since all four women’s games are only displayed on the internet, it is extremely hard to watch multiple games at once because it is a slow process to change from one live stream to another.  Meanwhile, the men’s games are all broadcasted on four different television channels and all it takes is an easy click of a button to go from one game to the next.

The negative portrayal of female athletes in the media goes beyond television to majority of the prevalent social media platforms used in today’s era.  For instance, people use the Internet to share their thoughts and feelings on the subject, most frequently through Twitter. Twitter is a place for its users to speak their mind in an efficient manner.  In some ways, this makes Twitter a dangerous and vulnerable platform to the women’s sports that already get plenty of hate and disregard elsewhere. Twitter also allows its users to “retweet” someone else’s post if they agree with it or like it.  So, people are able to make a simple message such as, “Women’s sports in general are not worth watching,” go viral through the two-step process of retweeting a tweet. Andy Benoit, a Sports Illustrated contributor publicized this tweet in 2015. Because of his job with the well-known franchise, it is likely that his tweet received a great deal of attention.

Controlling the media is the only way to put an end to the perception of inequality of female athletes.  Although this is an issue that goes even beyond the media, in this day, society is very much influenced by what they see on television and what they read on social media.  Athletes, specially women’s basketball players, deserve to be seen in a more positive and equal light.

Milner, Adrienne N. Sex Segregation in Sports: Why Separate Is Not Equal. S.n., 2016.