It’s no secret that Instagram has become a hub for food lovers worldwide. Whether health food blogger, junk food enthusiast, or adventurous food connoisseur, Instagram provides a space in which respective users can present diversified content and curate individualized niches. There is endless talk about the implications Instagram has had for countless aspects of our daily lives and interactions, but one that has piqued personal curiosity is the ways it has changed our culinary values systems when it comes to dining out.  Take a moment to think about any post on Instagram you’ve seen related to dining out—we often think to ourselves—wow, that looks so incredible, I should put this place on my list. It’s easy to be passive Instagram users, and to soak in this visual information without thought. It has become clear to me, however, after observing the behavior of myself and of those around me, that when it comes to food, Instagram is more than just a photo stream of beautifully prepared culinary content—it is a powerhouse that has actively shifted the culinary values we prioritize, as well as the global culinary structure.

Picture this: it’s a summer night in New York City, you’ve left the office after a day of working/interning/ and you’re racking your brain to think of a place to suggest for dinner/drinks/ with friends from high school /college/work. Whatever combination may best describe you, my millennial and Gen Z readers know the scene I’m describing all too well. Growing up, before the craze of Instagram and my involvement in any sort of social media, I used to sit on the banquet in the kitchen of my childhood apartment, as my family found itself in the common predicament of deciding where to eat. The nature of the conflict is, however, where the similarities stop. In this earlier, simpler time, my mother would pull out her trusted Zagat book and skim through the pages, throwing out suggestions before we settled on someplace that satisfied everyone. Now, when that group of hungry twenty-somethings on that summer is having the same discussion, there is no red and gold bound Zagat book in sight. There are, in fact, no food reviews in sight at all, including sites like Yelp—only a huddle of iPhones with Instagram pulled up on each screen. When ten years ago, my family would make a meal decision based upon respected reviews of a restaurant, my generation prefers to make this same choice based solely on pictures. I have identified a resulting cycle, one that reveals itself when one stops to consider the kinds of pictures that food bloggers post on Instagram to begin with. There’s a reason why food-focused Instagram accounts don’t post pictures at every restaurant in New York—the bloggers, whoever they are and whatever the focus of their content, only post the photos that look appealing, and thus these are the only pictures that we, as followers, get to see. This then helps determine where we choose to eat, bringing the broader elements of the cycle full circle. We all very well know, however, that looks can be deceiving.

My generation is immersed in a culinary environment in which the “Instagrammable” qualities of dining trump the gustatory ones. We now look to Instagram to provide us with information about the best looking food and restaurants, and chase down these locations to photograph the same dishes and outlandishly designed eateries as our favorite bloggers—our concerns with food quality have taken a backseat. A recent trip to Europe confirmed my suspicions. When deciding where to eat in a number of European countries, we instilled our faith in Instagram to guide us. There was no talk of checking Yelp reviews or the Michelin guide—all that mattered was that the pictures available on Instagram looked appealing. We can pin the blame on these food Instagrams for this prioritization of aesthetics over quality, and when one experiences a situation in which the two are not created equal, this pivotal shift from focus on quality to focus on façade is exposed. 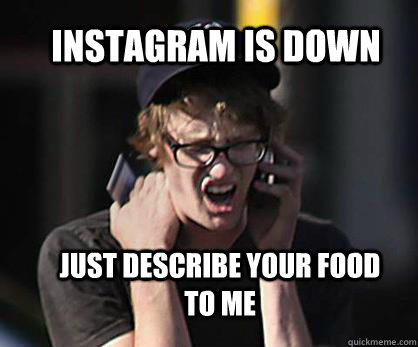 I experienced this personally in Europe when eating out for high tea, a classic British meal known for its petite delicacies and immaculate preparation. We chose to have our tea at a restaurant that is probably one of the most photographed in London, for its unique architecture, décor, and modern take on an age-old tradition. We had, after all, seen it displayed in countless photos before we planned our visit. The restaurant’s décor and atmosphere did not disappoint, from its futuristic, neon pod bathrooms to the pink velvet upholstered chairs and couches in the dining room—it was, as we expected, aesthetic and “Instagrammable” in every way. What did disappoint, however, was the gustatory experience—what we tried to tell ourselves we were really there for. We quickly realized people really do come to this restaurant for the pictures, not for an unforgettable culinary experience. What was more disappointing, however, was the realization that we had let the social media hype surrounding this locale overwhelm what we thought was our primary goal of seeking out quality, authentic food. A striking realization that stemmed from this experience is that the restaurant doesn’t need to have good food to bring in customers—the aesthetic experience it provides is more than enough to attract customers, which in turn works to maintain its prominent presence on social media. This restaurant, and experience, thus epitomizes and proves the power of this Instagram cycle, while simultaneously proving a larger but concurrent idea: Instagram actually has the power to influence the economic and gustatory systems within the global culinary landscape.

A well-known 2013 sociological study examined the presence and influence of the Michelin restaurant guide, and found that the guide, rather than operating as such solely for diners, was simultaneously influencing the ways that chefs themselves were cooking and preparing food, in order to fit in better with the ideals that the guide valued. Because of its power to determine what was considered “fine,” the guide actually had a large-scale impact on the entire European fine-dining landscape, creating a narrowing effect rather than encouraging celebration of diversity of tastes. The current Instagram phenomenon parallels this sociological finding: by valuing certain aesthetic culinary attributes, and presenting certain locations as desirable based on their “Instagrammable” qualities, Instagram is actively shifting the global culinary economy by making it necessary for restaurants of all kinds, from small cafés to five-star kitchens, to prioritize and place higher value on aesthetic attributes meant to bolster their  recognition on social media rather than on the quality of their food.

I would venture to claim, as a young person both watching and participating in this unprecedented shift, that the restaurants most frequently visited and photographed for their aesthetic attributes are those that can be characterized by an inverse relationship between appearance and taste, whereas those not competing for social media attention and channel that energy into the food itself can be characterized by a slightly different relationship that, while seemingly obvious, is one also seemingly forgotten in the chaos of concerns surrounding a restaurant’s succulent plant placement or cappuccino foam art: the more time spent on improving and creating the food itself, the better the food will be. A re-invigorated focus on the latter relationship is not, however, the answer to the realignment of the values of food creators and consumers. The potential for change now lies dormant with today’s younger generations, my own. We need to take a step back and reassess our culinary values, to experience self-reflection en masse, and understand what elements of our culinary experiences we have been paying for and chasing after, and to reassess what we hold to be most important. If the photographic qualities of food are seen as more valuable, in essence, paying a restaurant for a photograph of food is becomes the expectation, rather than paying one to provide a high-quality meal. At risk of sounding dramatic, the future of the global culinary landscape has fallen to us, and as the controllers of social media input, only we can decide when we are ready to stop and turn our attention back to what really matters.